Enigma, the Hidden Secret of the Third Reich

Cryptography studies how to process data to transmit it securely, even if someone access the information in transit. For thousands of years cryptography has been a key military technology. For example, Julius Caesar used a simple encryption technique to communicate with his generals. Starting from a message text, the method replaces a letter for another letter in the alphabet that comes after one or several positions.

For example, if the secret message is:

To encrypt, we can replace each letter with the next letter in the alphabet H->I, I->J and so on:

The reason to use encryption is obvious. Imagine yourself two thousand years ago. There is no telephone, internet, radio or anything similar. You are trying to attack an enemy army and in order to do that, you have split your forces into two, trying to enclose the enemy and force them to surrender. Now, you need to synchronize with the other side of the army so that you attack at the same time. But, if you simply send a soldier across with a message like Attack at dawn you have the risk that the soldier will be caught by the enemy army while trying to reach across. If the enemy is able to read this message they could as well maneuver during the night to escape the attack.

Here is where cryptography comes into play. If instead of sending a message like Attack at dawn you send an encrypted message, for example: BUUBDL BU EBXO now it's not obvious what the message means. Using a code secure enough so that only you and the recipient of the message are able to understand it, means that you don't need to worry about the enemy reading the message. For example, you could send three soldiers across different paths, and even if the enemy captures one of them, the attack could proceed as planned.

One of the most famous cryptographic mechanisms in history is the system used by German troops during World War II, the Enigma. Enigma is a family of machines that encrypt and decrypt messages based on a complex set of electric and mechanical components.

The relevance of the Enigma comes from the fact that it provided encryption that was vastly superior to most previous systems. It allowed the U-Boat submarines from the Third Reich to attack allied ships without any kind of warning. The Enigma encryption was broken by allied cryptanalysts. It is often said that this achievement hastened the end of the European war by two years. 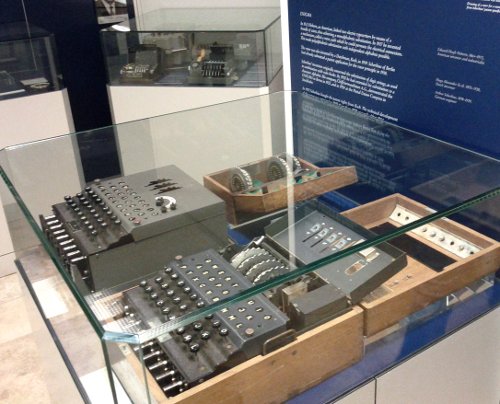